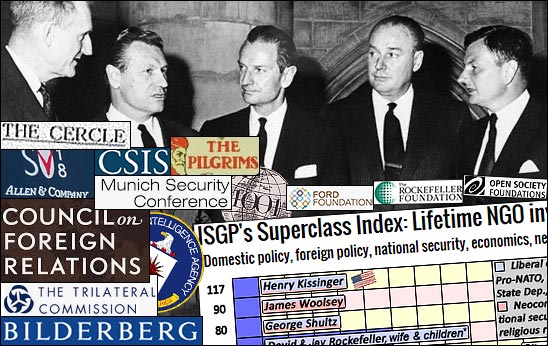 "[Think tanks] exert definite and even considerable influence on the process of elaborating and making political decisions. It is connected with the fact that ... leaders of such centers have as a rule personal close links with the [government]. Second, the centers are created in order to prepare and adopt the major political decisions in the shade, far from public. Third, such analytical and expert centers really accumulate the best intellectual forces of the country and fourth, not always but rather often, the centers were founded simply to provide jobs to [retired] politicians."

The names of institutes and individuals on this page have been gathered over the course of more than a thousand hours over 15 years from sources as:

Many fully-written-out sources can be found in various articles and mixed membership-biography lists on this website. However, providing specific sources with the names of each institute has proven to be completely impossible due to time constraints and for organizational purposes.

All mid- to low level institutes - those without any recognizable superclass names on the various boards - have been left out of these lists. This oversight really is about the 1,500 most important NGOs, with a few dozen key corporations mixed in.

This page has primarily been put together to make cross-referencing - as to who is involved in what - a hundred times easier than before. And maybe even more important, also to figure out in a rather scientific way as to which players are the most influential within the globalist movement.

People studying political science should have a good idea of the non-government organizations listed on this page. They vary considerable in purpose and influence, but are an integral part of the globalization process, as well as intelligence and covert operations. For an explanation of how various establishments overlap with each other, or oppose one another, the reader can visit the introduction page.

What keeps this entire network afloat are funds from corporations and foundations, membership fees, fund raisers and occasional government grants. Ban the foundations, curb corporate contributions, and the whole network will start to fall apart.

Interestingly, back in early 2004 this author was unable to find more than six or seven of the more important organizations below on one website or in one book, even after looking for it all over the place. Often groups like the Council on Foreign Relations and the Trilateral Commission were mixed in with the "Illuminati", the "Freemasons" and the "New World Order". Tiny bits of information on such groups as the Pilgrims, Le Cercle, the 1001 Club, the JASON Group, the Sun Valley Meetings and others were scattered all over the place and often not freely accessible. Information on mainland Europe with regard to these kind of groups was especially scarce. And in all cases no one had a clue how various groups related to each other.

As the reader can see, things have changed. A lot.

Below the reader can find names of prominent individuals ranked according to the number of private groups and a number of key corporations that they have (certainly) been involved with. Overall, this appears to be a very accurate "influence index" when it comes to, once and for all, and in rather scientific manner, identifying the "powers-that-be". Certainly it identifies all the key players in the liberal (globalist), conservative (defense), Catholic conservative (Opus Dei/SMOM), Zionist, and to a large degree even the Russian establishments. As the reader will soon realize, most of these people know one another very well. Anyone with an interest in globalization or parapolitical issues would do well to become familiar with these individuals. 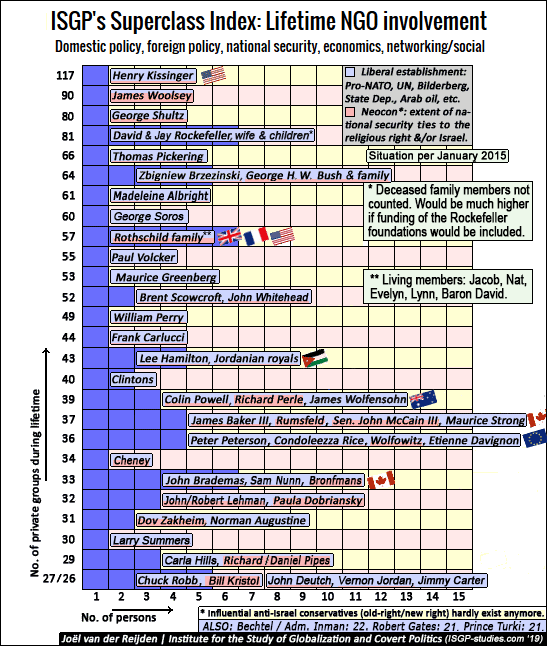 It's possible to check the rankings for yourself by doing searches on this page for particular (sur)names. Just over 300 still-alive persons are listed at this point, but it's not too hard to add another few dozen "helpers" that have been involved in less than 10 NGOs.

The above colors have been used to give an indication of each person's professional background. The reader can count all the think tanks, foundations, and other NGOs each person in this list is involved in by going through ISGP's NGO list.

THE GLOBAL SUPERCLASS INDEX
Last update: January 14, 2020. Recent deaths kept in for the time being for historical perspective. The situation will be analyzed and corrected in a few years.
Liberal: U.S.-centered: politics, economics, national security

Virtually non-existent due to the importance of Arab oil. Even the AIFL was largely initiated by pro-Zionist conservative interests. Most relationships with Israel go through the conservatives, both the neocons and radical religious right.